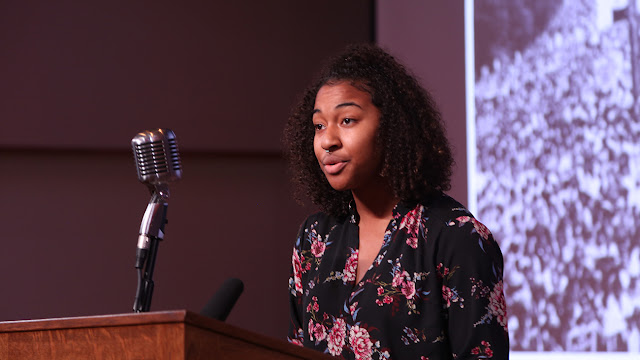 By Chip Chandler
West Texas A&M University students will offer tributes to and march in honor of civil rights activist Martin Luther King Jr. on Jan. 18.
The University, like other schools in The Texas A&M University System, will close Jan. 17 in remembrance of King.
As classes resume Jan. 18, WT students will march from the University Dining Hall to the Jack B. Kelley Student Center beginning at 12:15 p.m. After they arrive, videos of leaders from several student organizations reading excerpts from King’s speeches will play in the JBK Commons.
The University, on alternating years, incorporates a reenactment of King’s famous “I Have a Dream” speech, but this year, students will read excerpts from other orations.
“There are so many more powerful messages for various causes that he delivered,” said Angela Allen, WT’s chief diversity and inclusion officer. “We wanted the students to find meaningful excerpts from those speeches to help us all recognize that the battles that are still going on are not new.”
Participating students include Sir’Garen Grayson, junior public relations-advertising major from Amarillo, representing the Black Student Union; Tyrone Leggett, junior health sciences major from Bloomfield, Conn., representing the Black Student Union; Deanndra Murry, a December communication graduate from Houston, representing Diversity Ambassadors; Allan Baltazar, a senior criminal justice major from Houston, representing F1RSTGEN and Hispanic Students Association; Ashley Oakes, a senior marketing major from Amarillo, representing McNair Scholars; Tearanee’ Lockhart, junior broadcast journalism major from Amarillo, representing the Black Student Union; and Aurora Garcia Comer, senior biology major from Borger, representing the Black Student Union.
“The past few years have seen a rise in blatant racism and violence against American citizens of color,” Allen said. “So it’s important that we recognize, remember, celebrate and continue the fight for civil rights and equality for all Americans.”
Being reflective of and responsive to a diverse student body, faculty and staff is a key principle of the University’s long-range plan, WT 125: From the Panhandle to the World.
That plan is fueled by the historic, $125 million One West comprehensive fundraising campaign. To date, the five-year campaign — which publicly launched Sept. 23 — has raised about $85 million.
Local