'I’ve got something to say' MLK Weekend Comedy Show 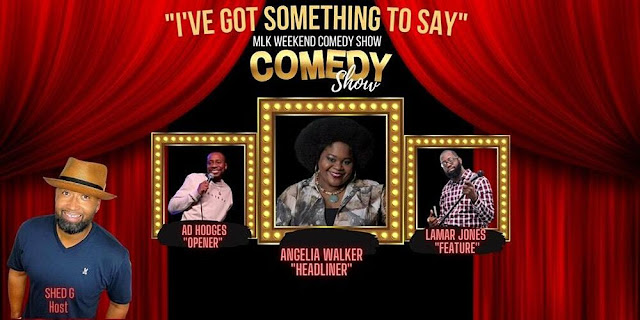 The “I’ve got something to say” MLK Weekend Comedy Show is scheduled for 7 p.m. Sunday, Jan. 16, at In This Moment Parties and Events, 707 S. Polk St., Amarillo.
Headliner Angelia Walker is Texas born and raised. She has been making audiences laugh for years with a stage presence that propelled her all the way to the finals of the Funniest Comic in Texas Competition.
Walker has opened up for top comedians such as Kat Williams, John Levitt, Robert Powell, the late great Charlie Murphy and many others. She has hosted and headlined at prestigious comedy clubs all over the country.
Featured comedian Lamar Jones was born and raised in New Orleans. He has performed all across the U.S. and shared the stage with some of the most well-known entertainers in comedy.
Opener AD Hodges is a Houston native. Born Artrell Sam, he found comedy at the prime age of 23. His inspiration came from many experiences from the countless times of childhood bullying, to maturing throughout high school and later finding acceptance as a young black man.
Shed G hails from Denver. Shed G is a faith-based comedian with a family- friendly style that captivates audiences of all ages and races.
General admission tickets for this show are $35 (plus $3.77 fee). Tickets include adult beverages and snacks. They may be purchased online at www.eventbrite.com
Local